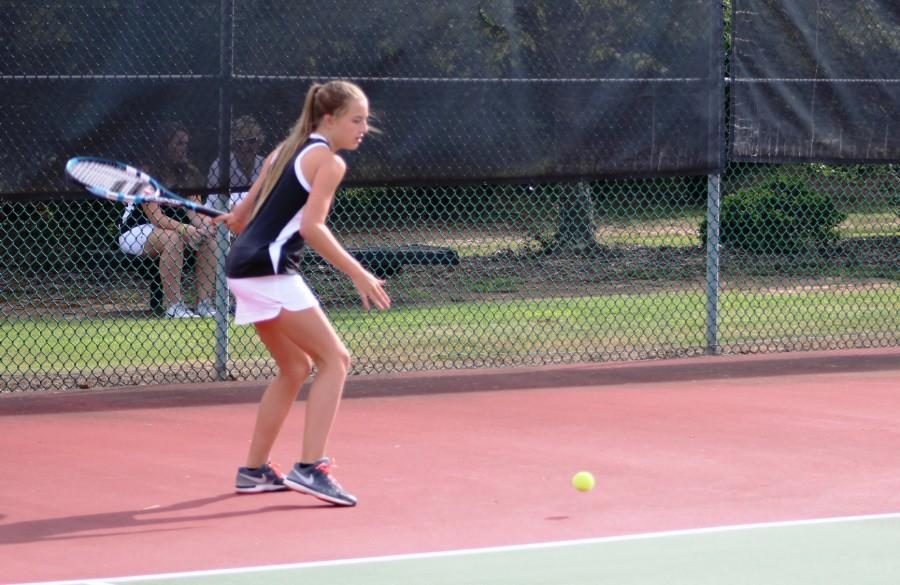 GREER– The top sixty four girls tennis players throughout South Carolina were chosen to go to Columbia for the State singles tournament. Hanna Henline was one of these players. She is a senior at Greer High school and she started playing when she was ten.

Her teammate Riley Driscoll “Hanna was a great tennis partner. She was always fun to play with and always did her best.”

Hanna was quoted as saying her best memory was riding on the bus with the team singing. When asked why she played tennis she said she was Inspired by Kylie Sandusky the Granddaoughter of LInda Sandusky

Linda Sandusky has been coahing tennis players for twenty years. Ten of thoes years were at Greer High School but for the other ten she coached in WV for 10. She also instructed for cross country for many years.

When asked about Hanna Linda Sandusky said “Hanna has played on the Greer High team since she was in 7th grade at Greer Middle. Hanna got started one day when she was with me and we dropped off Kylie, who is my granddaughter, at The Pavilion for tennis lessons. Hanna and I went to another court and I hit balls with her.” After that tennis became her passion and she wanted to play all the time. Hanna and Kylie’s parents have been good friends for many years so Hanna grew up doing things with Kylie–there’s a 5 year difference in their age, so Kylie was like an older sister.  It makes me happy to know that something I had a love for and passed to my granddaughter could be passed on to Hanna.” She later added “Hanna has been a vital part of our varsity tennis team all 6 years and we will miss her next year.  She is respected by her teammates both as a leader and as a player.”

Hanna Henline has not decided whether or not she will play in college but is thankful for the time she had playing with Greer.